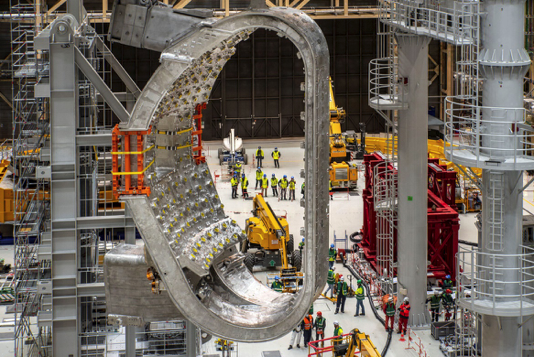 This Project is one of the biggest scientific and technological challenges and GRUPO INMAPA its very proud to take part of this exciting project.

ITER (International Thermonuclear Experimental Reactor), is a large-scale experiment that tries to produce fusion plasma which has ten times more thermal power than the power needed to heat the plasma.

Fusion is the source of energy that powers the Sun and Stars , under extreme pressure and temperature conditions prevails in the core of these stellar bodies, hydrogen cores are crashed and fused to form atoms of helium and release considerable amounts of energy in the process. In every possible fusion reaction, the reaction between deuterium and tritium (two isotopes of hydrogen) is the most accessible in the current state of our technology.

ITER is based on the concept of magnetic confinement and comes from a Soviet design called a ‘tokamak’, in which plasma is contained in a toroidal-shaped vacuum chamber.

Our contribution has been the manufacture of parts for this camera.

You can find out more about which cookies we are using or switch them off in settings.

This website uses cookies so that we can provide you with the best user experience possible. Cookie information is stored in your browser and performs functions such as recognising you when you return to our website and helping our team to understand which sections of the website you find most interesting and useful.

Strictly Necessary Cookie should be enabled at all times so that we can save your preferences for cookie settings.

If you disable this cookie, we will not be able to save your preferences. This means that every time you visit this website you will need to enable or disable cookies again.

This website uses Google Analytics to collect anonymous information such as the number of visitors to the site, and the most popular pages.

Please enable Strictly Necessary Cookies first so that we can save your preferences!